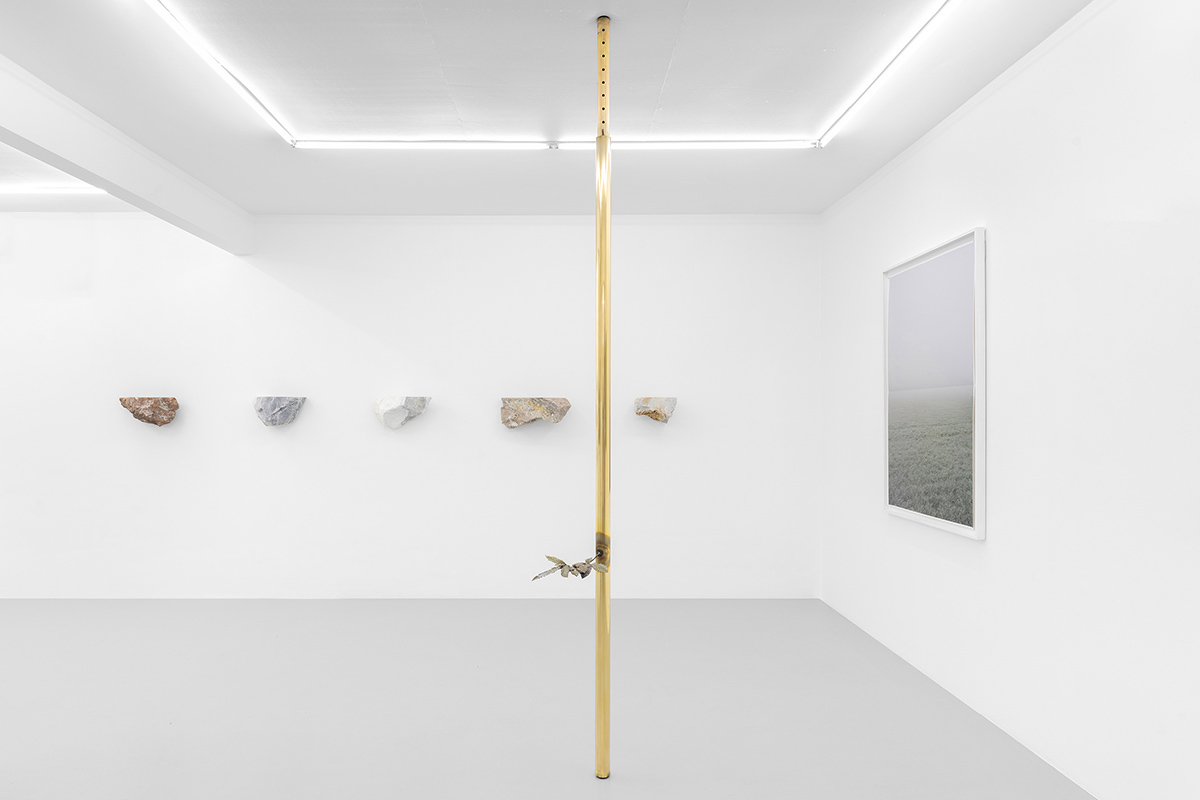 “Mémoire – mes moires…”, writes Michel Leiris in his book Langage tangage ou ce que les mots me disent; emphasizing how unstable the faculty of memory is, as shifty as light reflections on a sea with an undefined horizon. ‘Souvenirs d’été’ is precisely the title Stijn Cole gave to his latest series of works, which he started creating when him and his family chose to leave the village of Seloignes, near Chimay, to return to Ghent. One of these series, a collection of photographs of isolated trees, which were taken in the spring while the vegetation regains its colors and vitality, seem to be crossed in their middle by a vertical line. The artist exposed the left half of the image to summer sunlight, while keeping the right half protected from it. As a result, the photograph seems to be made up of two distinct time frames. One shows the immediacy of the captured pattern, while the other, altered by natural light, is a consequence of the relentless passage of time. Together they look like an open book that documents a time cycle and that summons the memory of fragile or tangible moments that are buried in both his and our memory.

Stijn Cole’s mastery lies in his ability to consistently strike a balance between very personal preoccupations and common evocations that can be shared over and over again. If these modified tree pictures evoke very precise memories in his own mind, like the stones he collected in the forests during his trip to Compostela with his daughter, they are likely to remind those who look at them of some of their own experiences. What is more common to human beings than the experience of time passing – whatever the form it might take? The philosopher and scientist Alfred Korzybski claimed that the cumulation of time would even be a distinctive human feature. Regardless of the assessment of this statement, the experience of duration and its expression through the means of art history is a recurrent preoccupation for artists, and Stijn Cole is no exception.

A few years after settling in Seloignes, Stijn Cole had already paid tribute to another artist who formerly lived in the area, Marthe Wéry (1930-2005). Inspired by a series which she created in 1976 for the upcoming Museum of Contemporary Art of Ghent, Cole had taken, during the whole summer, a photograph every minute between 5 pm and midnight. Each photograph is thus composed of a succession of vertical lines which, in a Western reading order, combine the luminous intensities of each hour until the darkness of the night. Continued in other locations, notably La Panne, these Timescapes, as he calls them, rely once again on a subtle equilibrium, this time between a rigorous conceptual protocol and a strong emotional sensitivity. The flow of time, materialized by the day-to-day variations of light intensity, is paradoxically concretized in an image as still as it is fascinating.

It is the same sense of balance that struck me as prevalent in the Colorscapes painting series. These methodically decompose landscape photographs into a chromatic spectrum. Fleeting moments are captured in specific locations. The former are carefully broken down according to the various color shades that constitute them and the latter are identified in the title or in some indications written on the canvases. The different shades are then transferred, with the naked eye, to a grid (16×16 squares) traced on the canvas and arranged in a reading order, from lightest to darkest. Applied with a brush, these pictorial gestures ostensibly embrace their tactile and sensual presence, while enabling a landscape to be mentally reconstructed out of personal memories. The Colorscapes series are a synthesis of an experience that can be both conceptual and retinal and create a singular midpoint between abstraction and figuration.
The theme of the natural landscape (rural, mountain or maritime) is probably the one that best suits Stijn Cole’s multidisciplinary practice. Whether it is “artialised”, as the theorist Alain Roger suggests, or reproduced in one way or another, the landscape always stems from a particular point of view. It is therefore both an individual and social construction. And Stijn Cole likes to build and deconstruct! If the Colorscapes are the result of complex deconstruction and reconstruction processes, Cole also likes to simplify his gesture: a blue horizontal plane over a green plane evokes a composition that is usually attributed to landscapes. Sometimes, the synthesis is even more radical: a monochrome is simply structured using two or three layers of varnish (matte, satin and/or glossy) and it doesn’t take much more for one to perceive it as a landscape. In a subtle shift, the solid surfaces are transformed into areas of unexpected depth, while the surface of the painting becomes a pictorial space flooded by the gaze.

If the landscape is the specter that haunts Stijn Cole’s abstract compositions, it is the horizon line that reveals it. This imaginary line where the earth – or the sea – meets the sky is the landscape’s structuring element, even if it is reduced, in the artist’s works, to a simple chromatic transition (light/dark), to the passage from one varnish to another, or even to a simple fold in the photographic paper (a remarkable paradox in this case: it is the modernist assertion of a medium’s materiality which restores its figurative agency). The horizon always organizes the space, modulates the luminous intensities, and invites spatial reconstruction as well as subjective projection. As localized as it may be, by a title or a geographical indication, the landscape surrenders itself and summons reminiscence, the activation of the memory and the evocation of recollections. If the artist starts by questioning a key theme in art history and the specificities of each of its mediums, he then imperceptibly drifts towards his own personal experience; not imposing on us, but rather inviting us to add our own narrative.

If the artist is at ease with these various mediums, he is equally at home with drawing. His pencil drawings on paper however differ from the rest of his work in their precision and swarming detail. They take on the precision of a survey and convey a form of accuracy that could likely be described as “documentary”, a term the artist associates with some past lived experiences. The drawings articulate the space and steer the densities of light with the same intelligence as with the paintings but through a different means: mimesis. If photography is the ultimate art of mimetic reproduction, Cole alternatively sets emphasis on elements that attest to the material nature of a photography. His drawings on the other hand take a similar approach, but without concern for colors. This explains why a chromatic scheme, a small grid filled in with different color strokes, is sometimes added to them. Cole’s drawings then ideally take on as much mimetic qualities as diegetic ones.

Whether painted or drawn, detailed, or reduced to its structural lines, the landscape remains a synecdoche. It is a part evoking to a whole that is in turn ungraspable in its totality. Caspar David Friedrich well understood this. Even when Cole creates polyptychs to suggest changes in the viewer’s position, which also implies changes in light, he does not deviate from this rule. Upon being invited to create a public sculpture for the Emil Van Doren Museum in Genk, Cole carried out a bronze version of an idea he had previously and successfully developed: casting fragments of rocky surfaces in several places (Brittany, South of France, etc.) to literally “imprint” each of the details shaping their surface. Reproduced in bronze or resin, these impressions reproduce, on a limited surface, the roughness of the mountainous ground, in the manner of a horizontal coring seizing a sample of earth’s crust. The precision of the replicated surface seems then contradicted by the modesty of the portion given to see, even more notably when compared to what it suggests. Although reduced to uneven surfaces, these works manage to condense a history that is not only geological. Historical, ecological, artistic, or subjective stakes are here layered.

The exhibition Souvenirs shows new developments in the artist’s three-dimensional works; new reminiscences added to older ones, which further nourish a memory that never reaches a saturation point. An oak tree branch seems to grow from a bronze tube, as if life managed to tear itself away from inert matter, as if time managed to tear itself away from immobility, and as if memory tore itself away from oblivion. Further on, some marble pieces from Rance and Carrara are cut in a rigorously straight line that can only result from human intervention. Aligned on the wall, keeping the cut at eye level, the height of the anthropocentric point of view that Erwin Panofski has analyzed at length, the blocks draw a new horizon, a new line where earth and sky meet. By their simple alignment, without any artifice other than the precision of the cut and the rigor of their ordering, they draw unforeseen depths, open infinite perspectives, and promise worlds waiting to be discovered: The worlds of Stijn Cole; the worlds he offers to share with us.

– Pierre-Olivier Rollin, writer, curator and director of the BPS22 museum