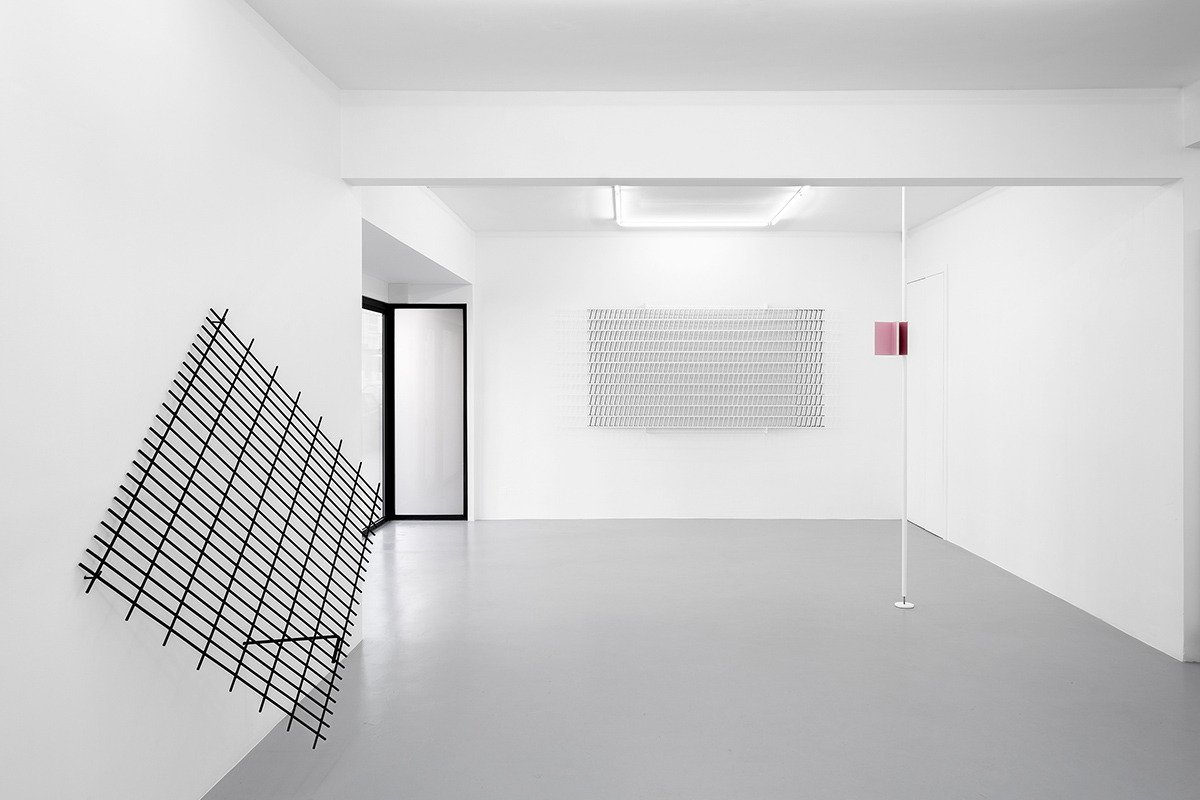 Fernanda Fragateiro usually displays works containing original books and plain materials with hybrid origins from the history of art and architecture. Within her sculptures, she establishes links between the production of knowledge and its aesthetic potential, as well as its semantic and historical ramifications.

The chosen references for this show are the works of women artists Agnes Martin (1912-2004) and Charlotte Posenenske (1930-1985), key figures of minimal art, and philosopher Jean Luc-Nancy’s book Being Singular Plural. In Être singulier pluriel, the original title of the book, Nancy deals with the notion of co-existence with each other, and the question of how we can still speak of a ‘we’ or of a plurality, without transforming this ‘we’ into a substantial and exclusive identity. Fernanda Fragateiro develops forms that relate to the presence of sculpture and its singular placement in space. Her first solo exhibition in Brussels is about construction and repetition, reading and perception of space. But the purpose is also to explore the issues inherent to the physicality of the elements and the idea of the opposite. She perfectly describes that tension as “contrary to solidity and transparency, robustness and delicacy. I equate the boundary between the obvious and the subtle. The nothing, the blank, the silence, the void as an element of constituting the perception of rhythmic phenomena”.

Like open books, her wall sculptures in the vitrine evoke the modular sculptures by Posenenske, based on industrial principles of geometry, standardization and mass production. About this notion, Fernanda Fragateiro explains: “I base myself on the modulation of a structure, with several possibilities of multiplication and adaptation, understood not only as a compositional issue, but also as an action that goes against exclusivity.” In the gallery, the exhibition starts with another open book on an architectural tubular structure tensed between floor and ceiling, generating a new physical experience of spatialization associated with visitor presence.

Walking in the space leads to the discovery of grids placed on the gallery walls. Each grid is unique and slightly different, muddling and distorting the predictability of repetition. The play of juxtapositions and superimpositions does not allow to definitively fix the grid pattern. The subtle variations of overlays and offsets of the suspended grids causes a perception of vibration and movement, taking over the reading of the structure itself. This ensemble of metal wall sculptures is based on a small diagonal grid drawing by Agnes Martin from 1960 titled Aspiration. Here, most of them are white or black and white, reinforcing the idea of dichotomy and dialectics present in the works.

The accumulated cultural history appearing through Fernanda Fragateiro’s works also brings other references to the surface, such as the modernist series of wall lights by Charlotte Perriand (1903-1999), or the multiple variations of grids by François Morellet (1926-2016). Her layered practice is in a constant dialogue with other artists. This recent production follows research reflecting on two women artists who turned their back to the art world in the late 60s. Proposing a new path, Fernanda Fragateiro addresses the other and the self, the community and the individual, as well as the nature of language and meaning.

This solo show is part of a larger exhibition programme, entitled PORTUGUESE INCLINATIONS.
The project is supported by the Portuguese Embassy in Belgium and Camões – Instituto da Cooperação e da Língua