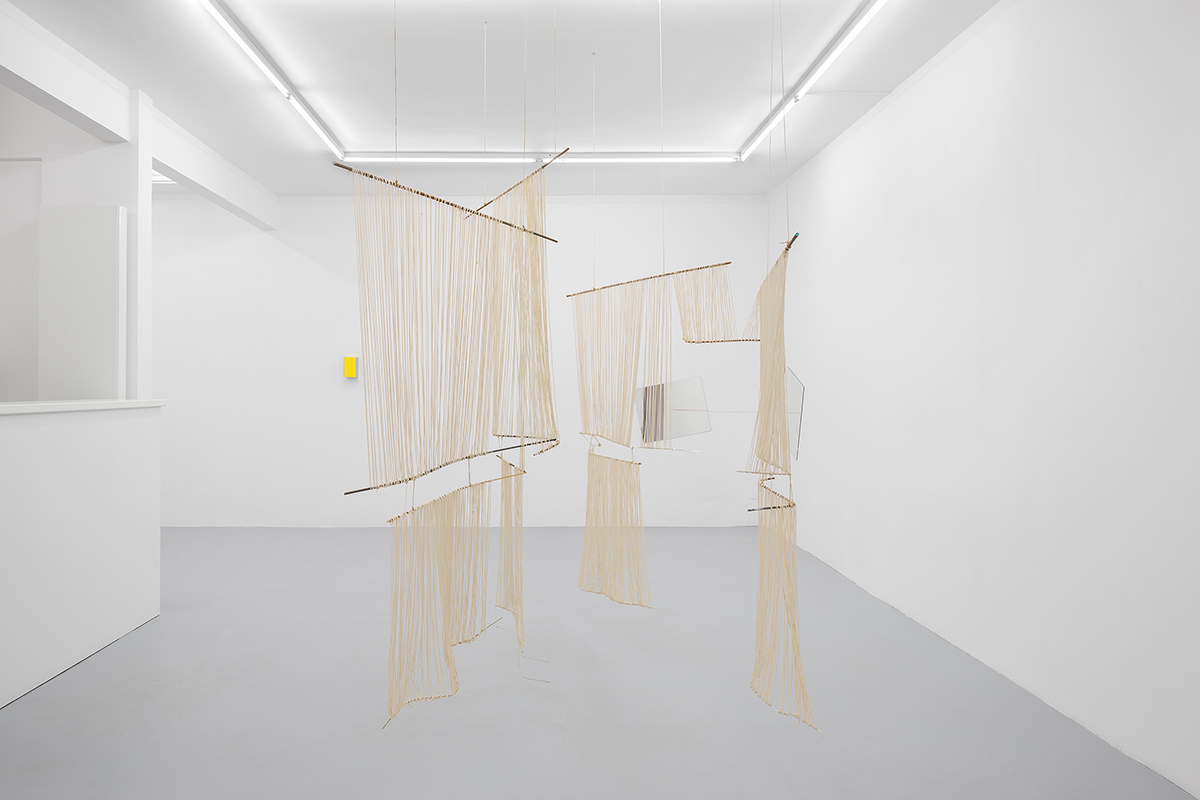 Jonathan Sullam, Side by Side, 2019, Print and neon light, variable dimensions (photo by Luk Vander Plaetse)

Extended Spaces is an acknowledgement of artworks developing a pragmatic architectural relationship, which in turn induces spiritual awareness through the subtle process of perception. Often, the artworks will transform space by means of expansion, contraction, addition or even subtraction. These artwork protocols create spatial awareness and poetic experimentation. Moreover, they express the need for the rational and spiritual to include the spectator at the epicentre of a modus operandi. He finds himself confronted with states of being; relationships amid the material and immaterial occur, articulations concerning the interior and exterior are systematically drawn and the artworks all reveal themselves as case studies for transitional states and spatial wandering. The spectator can be pulled within or beyond an artwork, causing specific or abstract experiences due to these relational manipulations of space.

Guillermo Mora extends the gallery entrance with a selection of works engaging the spectator towards them. By creating an inward-looking place, the artist’s drawings emerge from the overlapping of several layers in which colour reinforces a seductive play between boldness and reserve. His works suggest the existence of something that will emerge later but bring about a hiatus between what is hidden and what is visible.

José Pedro Croft presents a large format engraving, opening a complex space that builds itself up in front of us. Here, the overlapping elements differentiate something that is precipitous and fluid (surface) from something deliberate, slow and repeated (line). Oscillating between the subtlety of the glaze and the density of a dark element, the work is on one of the sidewalls of the gallery and absorbs the spectator. On the opposite side, the same artist presents a small wall piece, which makes use of two mirrors and one red elastic cord to transform our perception of two diagonal screens on a horizontal plane. The passage between a focused and frontal vision into a wider panoramic gaze ties in with the gallery space, reinforcing the transitions between its different environments.

Esther Gatón works in the gallery’s central space, presenting a sculpture/installation that refers to the notion of filter and movement. A movement that is continued in several directions and can simultaneously hold back and push forward. The instability of the suspended elements reinforces an idea of mutation amid the succession of veils, leading us towards another place.

Fernanda Fragateiro focuses on the cultural heritage of Modernism and its claim for fluid and transparent spaces. The artist produced a series of books debating such claims, enclosed within stainless-steel objects. The content’s inaccessibility and careful presentation explores how embodiment challenges immateriality through reflection. Questioning the form and presence of space, her artwork assumes a political stance as it examines the Modernist utopia. Displayed on several of the gallery walls and are presented as focal points, Fernanda Fragateiro’s artworks balance the discourse of the exhibition as a whole.

The work by Rui Calçada Bastos can be found in the most protected space of the gallery, developing along lines that connect introspection and amplitude. The artist creates a temporary place, signalled by the light of a lamp and a portable table. On that table, two mirrors reflect each other, suggesting an entrance to an infinite and abstract world. Exploring the idea of restraint, his work opens out to a fictitious space.

Jonathan Sullam’s sculpture in the gallery window is an object composed of tubular light bulbs lined with images of distant galaxies. Facing the exterior and pointing towards a remote and future place, this work questions our perception of time and space, overlapping its own light and the light of stars that, most likely, are long dead.

Between small and large formats, the interior and the exterior, between the desire to hide and the need to show, these works of art explore different ways to fathom space. Activated by our perception, in a swift and straightforward manner or in a delicate and drawn-out way, they change our position and unfold space in multiple realities.

– Sérgio Fazenda Rodrigues (Lisbon, 1973) is an international curator as well as an editor, writer and architect.

This exhibition was organised with the gracious support of the Portuguese Embassy in Belgium and Camões – Instituto da Cooperação e da Língua.