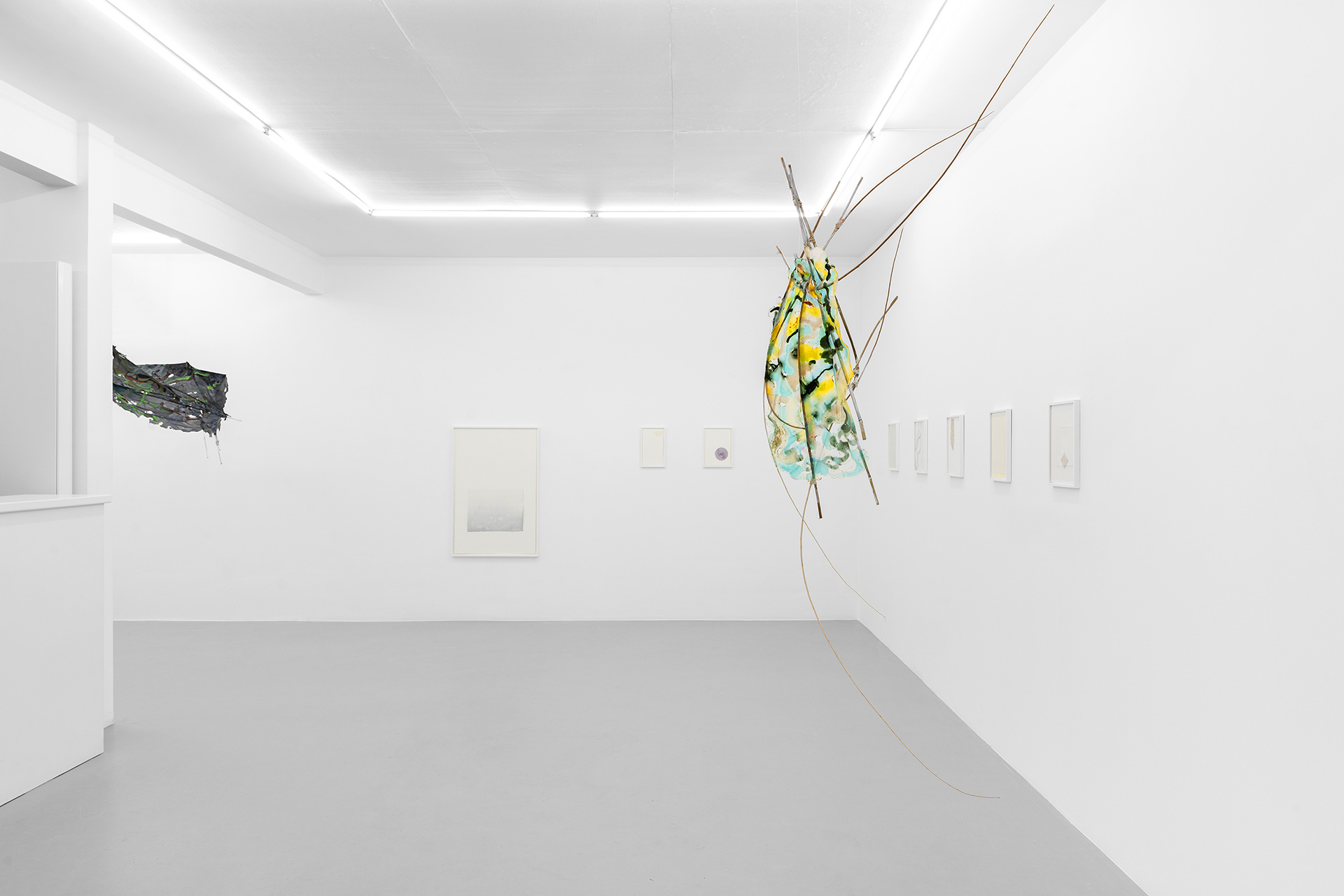 “What is important now is to recover our senses. We must learn to see more, to hear more, to feel more. Our task is not to find the maximum amount of content in a work of art, much less to squeeze more content out of the work than is already there. Our task is to cut back content so that we can see the thing at all.”
– Susan Sontag, Against Interpretation, 1964

Esther Gatón and Gudny Rosa Ingimarsdottir’s artworks resist interpretation. That is not to say that they don’t evoke anything, quite the opposite – ominous skeletal structures, rolling mountainscapes, the surface of a lake dimpled by vegetation, bursting cells, joyful blasts of colors… Their works draw up an endless variety of landscapes, seeming to take shape in our minds then sliding from one visual association to another, refusing to freeze under our gaze. As soon as we think we have grasped the work, its lines twist, unsuspected details are revealed, the light pierces the composition and transfigures it.
The titles support this equivocal experience. Esther Gatón’s titles form a poem that coexists with the work without explaining or describing it. Gudny Rosa Ingimarsdottir often gives them the prefix ‘untitled’ followed by a word in Icelandic, English or French, thus offering an open outline. Always elusive, their works escape the impoverishment imposed by a rigid and reductive analytical grid.

Methodology and precision are, however, constitutive elements of both artists’ approaches. Both collect, inventory, test, establish precise gestures and build their own formal vocabulary from disparate fragments.
The gestures carried out by Gudny Rosa Ingimarsdottir become a dance between her work tables, on which several pieces are simultaneously assembled. The various papers she preciously collects hold as many memories, souvenirs and impressions. She peels them, cuts them with a scalpel, scratches them to penetrate the thickness of the paper’s pulp. Through this dissection of plain materials and recurring images from her own work, the stitches that join the layers together become scars. An underlying sense of understanding sometimes emerges from the inframince that separates the component parts of the composition, before slipping away again.
In Esther Gatón’s work, the notion of stratigraphy echoes the excess that surrounds and fascinates her – contrasts in style and taste, dissonant colours, or the constant intermingling of biological and artificial materials. The artist prepares residues of natural materials and transforms them into liquid bioplastics, with which she paints silk strips that are then draped over aerial structures made of flexible wooden arches. Willow, seaweed or paprika are mixed with shimmering glitter to form hybrid monsters, vibrating under every breeze and variation of the light. At once playful, sensual and disturbing, these strange creatures also refuse to be identified and assimilated.

The artworks of Esther Gatón and Gudny Rosa Ingimarsdottir must be discovered gradually. You have to approach them, move away, change your perspective to slowly apprehend their volumes, their architecture and their surfaces. Sensory experiences in their own right, the works invite us to listen to the rhythm of their cuts, burns and absences, to imagine the unsettling textures of their skins, to taste salt or the bitterness of orange peels on our tongue.