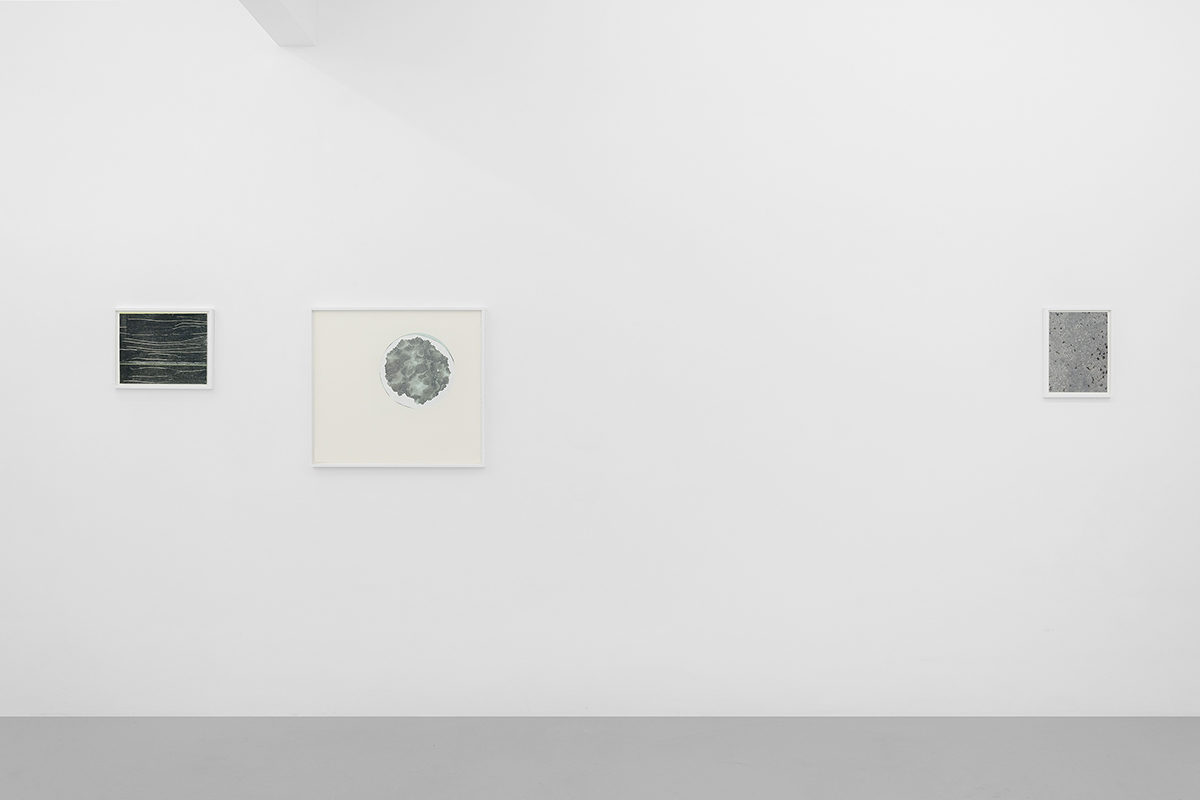 We are glad to present the first solo exhibition of Gudny Rosa Ingimarsdottir at Irène Laub Gallery.

Gudny Rosa Ingimarsdottir creates works on paper that combine a multitude of techniques and media. Her art is simultaneously abstract and figurative. Patterns, forms, words and lines create fragile compositions that are suggestive and open to many interpretations. Her tools are not so much pencils but rather needle and thread, knife and scissors, and a diverse range of papers – from tracing and carbon paper to wallpaper – which she works with and brings together one layer at a time. Her surfaces are partly translucent, the lines are as delicate as humanly possible, white and careful tones prevail, organic forms turn away into themselves. The emptiness/blank space under the forms and between the lines gives the compositions the silence needed to focus. The silence that the artist creates comes from within; it is a departure from actions and narratives. She uses language in single sentences, showing the limits of language as a means of communication. Her artworks and objects try to visualise that which is not spoken of. This reticence gives the work of Gudny Rosa Ingimarsdottir an equilibrium that is personal and universal at the same time; a delicate force pregnant with emptiness and doubt.

Her compositions are economical, they drift around the centre of the sheet or nestle on the edges. Other works are full-page, all-over, as if they are cut-outs from a larger whole. Her drawings seem simple but are also elusive. Her signature can be found in their layered surfaces, they resist the notion of one single focal point. Like a surgeon, the artist works layer by layer, building something up by exclusion and so accesses the heart of her subject. She cuts into her sheet, adds a layer of tracing paper, hides and peels. This intense exploration serves a double purpose. On the one hand, she can fully penetrate the shell of her subject. On the other hand, the focus is so great that the overview becomes lost, every connection to a possible overall picture disappears. Moreover, some works are double-sided, their surfaces interchangeable. Other works can be tilted and are without a fixed viewing angle. It is as if she wants to zoom in or enter, scanning along all the edges, looking for the interior, for the so-called pure core of herself and everything.

Starting points for Ingimarsdottir’s work are personal experiences, emotions and encounters that are intuitively translated into a composition on a plane. They refer to a certain state of mind, to conflicting sensations, to the complexity of human relationships and to verbal and non-verbal communication in society today. One characteristic of her method is a constant re-reading of her own oeuvre; returning to previous drawings, objects and texts. Creating new cut-outs, repeating fragments of sentences and giving them a new space and context. Processing experiences and emotions literally and figuratively, going beyond. She recently delved deep into a collection of letters she had received from contacts in Iceland in the 1980s. She herself lived overseas at the time; she found only their answers to her letters. Re-reading those stories and moments in time – and being reminded of what she might have written – provided new input for her work, which resulted in objectifying those lived moments. Her work on paper creates a visual translation of trains of thought, feelings, or even traumas. However, the reading of her work remains open-ended and unrestrained, their fragility invites attentive observation and a personal deepening. Her works are resting points, flirting with transparency, presence and restraint.

Titles have recently started playing a greater role and offer new perspectives on her work. The Sunrise series shows no sun, but angular line compositions, wires between drawing pins, a cloud of marks. Our looking is put to the test: how to see a sunrise in a grid or in angular lines? The associations that the viewer makes are often contradicted by the titles, and only rarely confirmed. Do we see organic forms or conceptual-abstract compositions? In some drawings we see a grid that fills the surface, like veined marble, like the floor plan of a building or railing – offering the viewer something to hold on to. Rhythm is more present in her work than before, in the succession of words, variations of forms. She plays with transparency, perforating the surface and cutting out layers, creating a composition that moves between our eyes and the surface, that gets stuck, guides and seduces us. Our gaze vacillates between microscopic and macroscopic; we see the smallest details that give a glimpse onto a larger whole, spots that may be planets. Gudny Rosa Ingimarsdottir presents layered drawings that have great denseness, modest and ambitious at the same time.

– Eva Wittocx
Eva Wittocx is a curator and art critic based in Brussels; she is the head of the contemporary art department at Museum M in Leuven since 2009.