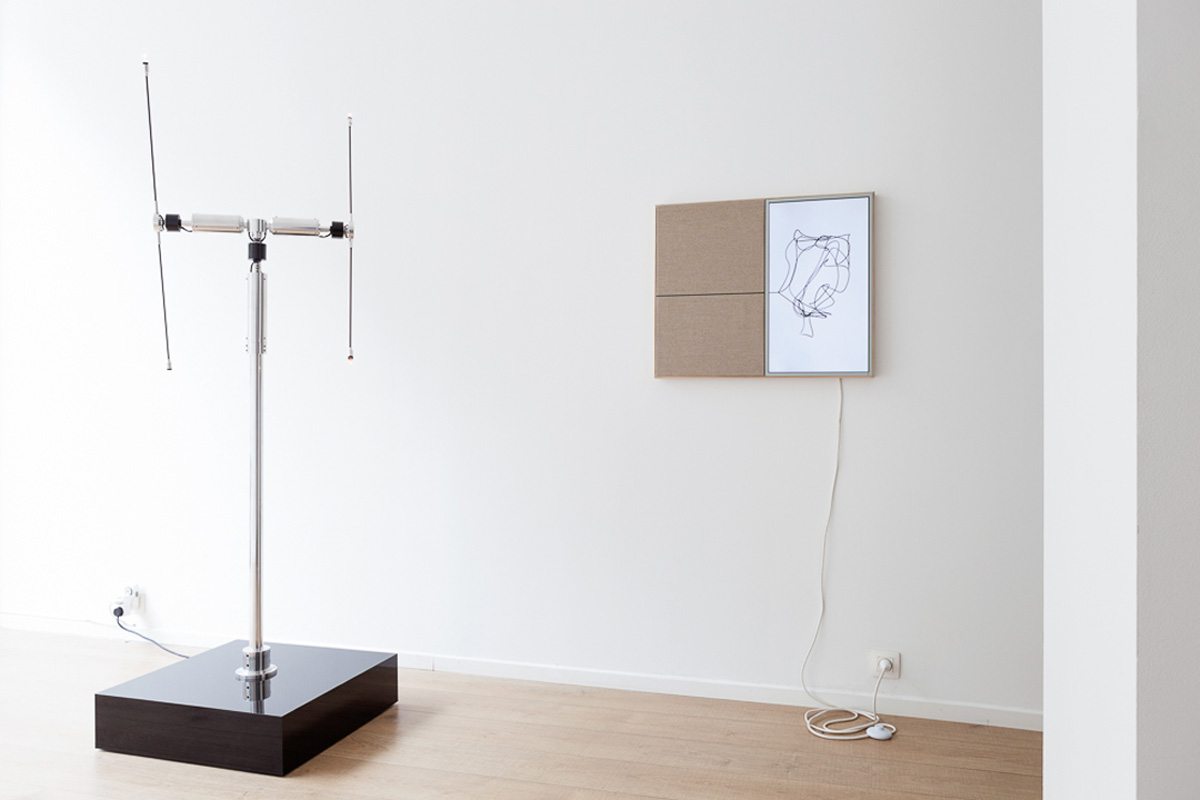 Laurent Bolognini and Pascal Haudressy, Exhibition view of "In Between" at Irène Laub Gallery, Brussels (BE), 2017 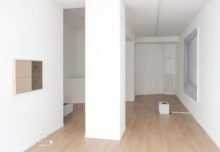 Pascal Haudressy and Guest Laurent Bolognini, exhibition view of "In Between" at Irène Laub Gallery, Brussels (BE) 2017

Two large square formats appear at first sight, either of abstract paintings or of photographs, although it is difficult to say which. Drawings, volumes and perpectives can be seen. A subtle interplay of shades of grey and white suggests a probably fictitious space derived from a model before its enlargement to size, such as those conceived not only by photographers, but also by painters.

Photography may have the upper hand, for little by little, one notices that the image acts as the screen for a projection that does not overlap but is instead thoroughly integrated. A sort of screen setting, like a receptacle of a projection that merges in. Therefore not really a video installation. Nor an environmental setting either, due to the absence of spatial and volumetric dimensions. The large square formats are in fact abstract paintings where an image merges in by way of a projection, defining a virtual blueprint which in itself creates an event. Sophisticated technology sends a fixed light beam which intermingles perfectly with the pictorial composition.

This sets the scene for an external irruption which is subsequently identifiable as an undeclared flood or the gradual insinuation of light curling smoke, though too light to constitute a threat. One is left with the impression that natural elements intrude softly into this serene, almost clinical environment.

Laurent Bolognini is a matterless sculptor. His body of work stems from Optical Art initiated at the turn of the XXth century by Marcel Duchamps and further developped by Julio Le Parc. Working with light, the sculptures sway between reverie and technology in order to question the reality of human condition. Creating persistence of vision effects the twirling lights create evocative and poetical imprinted shapes on the eye’s retina. The artist hence creates a new pictorial matter between sculpture and light choreography.

What one is ultimately confronted with is the culmination of a long elaborative process. A process that starts with a drawing depicting the scene, followed by a 3D spatial simulation and the insertion of an impending action. This paves the way for the model’s materialisation, the real volumetric and « sculptural » space where the action unfolds.

Finally, the unalterable  painting is produced as it awaits the projection, itself realised separately. Each stage of the process cancels the previous one to emerge finally as a balanced hybrid, or total fusion, of two disciplines : painting and projection. Haudressy defines the consequent spatial perception of the initial model as « atmospheric ».
The search for balance is a constant factor in the artist’s work who aims at reconciling opposites : material versus immaterial, two-dimensional versus 3D, natural versus artificial are all examples. He succeeds in doing so by combining different layers of representation and by establishang a connectivity between the different elements present in his production. In spite of its formal appearance and its recourse to a certain increased virtual reality, the resulting artwork could be described as meditative or even contemplative, calling on the intellect as well as on human emotion.