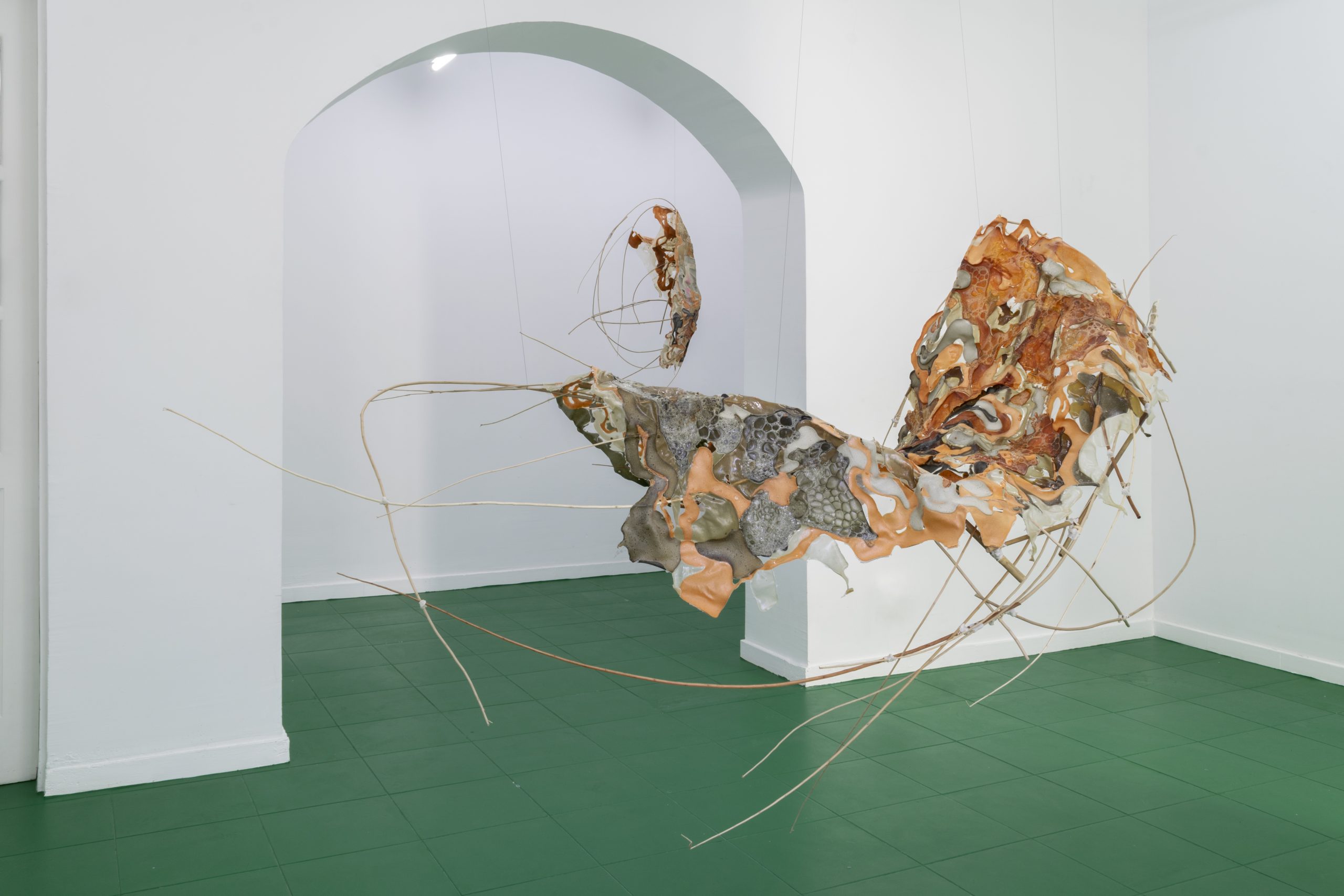 “Eu tinha poucos anos e já era rigorosamente anciã” is Esther Gatón’s first show in Portugal, and the opening of Verão’s new space in the neighbourhood of Campolide. The title is a sentence taken from the work of writer Elena Anníbali, and could be translated as “I was only a few years old, and already a rigorously old woman.”

Voluptuousness and ambiguity are returning themes in Esther’s work. She makes sculptures that both follow and trick the materials they are made of: their forms behave as one would expect — they spill, they melt, they roll — but they also bounce, turn, use decorative effects, mix smells, and confuse our perception.

In Verão, the sculptures simultaneously invoke fantastic creatures, fast-food, and marionettes, without dedicating themselves to one single representation. Just like in infantile memories or dreams, images function all at once; they bring together unrelated elements, and affirm queer connections in joyful ways.

During the past few months, Esther has been researching new ecological materials and processes. Her aim is to work in a way that is respectful to the environment, while also allowing her to experiment with unfamiliar textures and forms. With the help of other researchers, she she has developed a bioplastic made from everyday ingredients such as seaweed, sugar, eggshells, paprika, or flowers like goldenrod, which come from the artist & her friends ́ breakfasts and trips to the English coast. The pragmatism of using what’s at hand has acquired personal meaning, and inspired alchemical excitement; the sculptures are now made from both intimate memories and biodegradable waste. The sculptures have grown into sinister prolongations of these private experiences.

Theses hybrids now unfold in the space, hovering over the sporty green tiles, and responding to the gallery’s inner shapes and unique light. Verão is located in the underground floor of a residential building, connected to a small patio from which Lisbon’s clear brightness invades the space. The sculptures are intentionally translucent and slim; they incorporate changes in the light, and the and visitor’s strolling, as part of the many sights they aim to produce. They expose their inner and external sides equally, inviting us to take a closer look, while while cautiously being embraced.

Finally, inside a tiny room at the end of the space, there is a small circular mirror on which the artist has painted a long, thick eyebrow, and written: “this is Frida’s eyebrow, and you”. With the humorous tone that is commonly found on merchandising and gift items, the end point of the show offers a discreet homage to Frida Kahlo, the one female painter who has truly entered pop culture, for now.