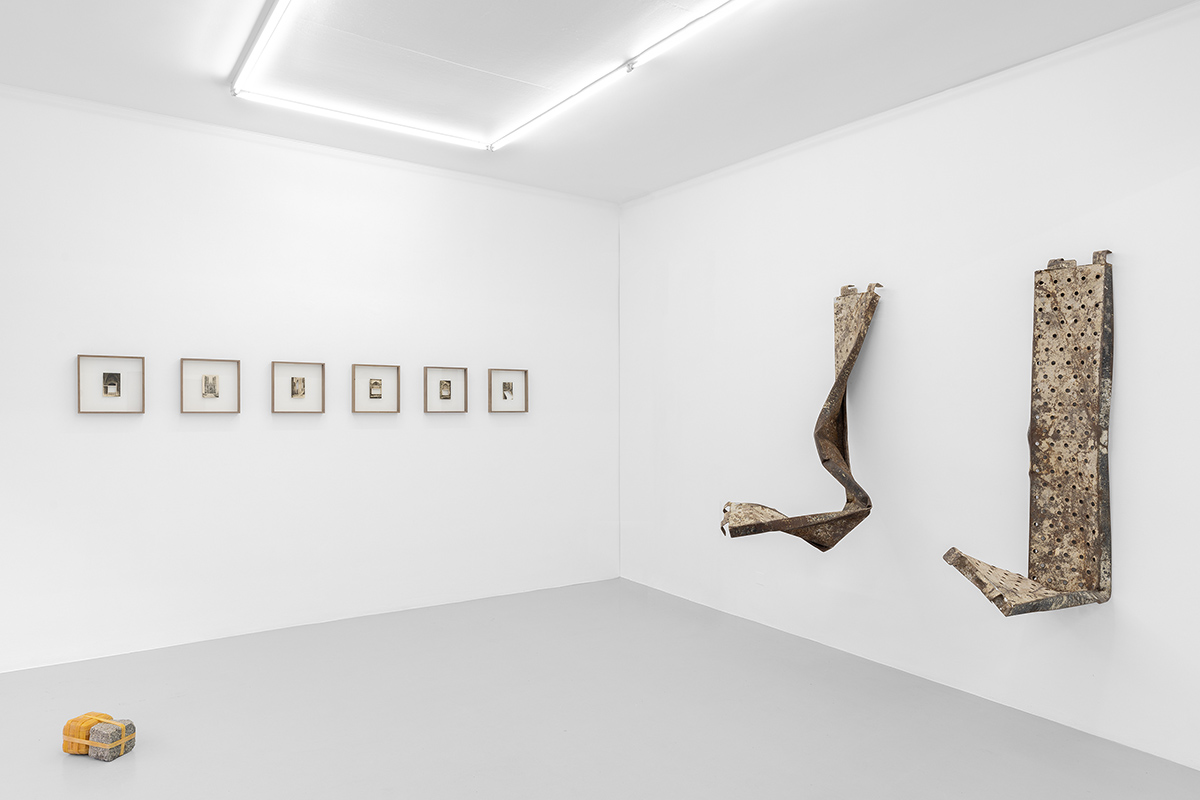 An exhibition curated by Gregory Lang.

Rui Calçada Bastos proposes an exhibition questioning notions of balance and depth through a selection of works that create spatio-temporal breaches in the foundation and the intimacy of our memory. The artist develops and renews his visual language linked to construction and urban environments, which is marked by encounters, associations and found objects presented in new settings. His new works incorporate another dimension, one that connects their surface to their depths. He adds and removes elements through chiseled gestures, so simple yet precise that they become almost surgical. Bastos introduces shadow areas to his compositions, while he questions or subverts themes of verticality and precariousness, emptiness and perspective.

The artist creates new views in architectural sceneries and in landscapes frozen in time on aged postcards, using both pictures of cathedral walls and memorabilia. For the former, the somewhat old-fashioned black and white compositions entitled Cathedral Thinking, he uses underpins to open up new spaces in the image. Just like carpentry pieces, these props seem to be temporarily supporting and maintaining an unstable structure that is bending, spilling out, and which would need to be reworked. For the latter, a series of Imaginary Geographies with faded colors, Bastos adds cutouts to alter the viewer’s perception of the given space. This way, he provides a heightened sense of depth, reinforcing their nostalgic feel. In the making of these two series, the artist poeticizes the recovered images and transforms them into sculptures through cut-outs and delicate assemblages of balsa elements (a light, fragile and brittle wood, usually used for 3D models). The careful layout, the way in which the paper perfectly aligns with other sublayers or even, at times, cantilevers over them, creates subtle plays on our sense of perspective and explores the porous boundaries between installation and image. Rui Calçada Bastos thereby presents new spaces of perception and subjective knowledge.

This search for the dividing line between tenuous equilibrium and stability is echoed in his installation, Pyramid. The installation casts an architectural shadow that is enhanced and further spatialized by a double light projection using old slide projectors. In dialogue with the installation, a photograph captures the precise and rather delicate moment of a looped cable, stretched out on a construction site’s bare ground in Sao Paulo. It is again a question of position and balance point, of verticality and gravity, also addressed in the two scaffolding elements folded perpendicularly to the wall. This installation, also extracted from the construction world and entitled Supreme Intrigue, becomes a twisted sculptural shape that lets the gaze pass through it. As such, the piece participates in this ongoing game of seeking out a fragile equilibrium and tension between heaviness and weightlessness.

The gallery’s front window displays works addressing mental projections in a public space, Urban Scars, a photograph with white screens painted on a building’s supporting pillars, and I have not yet forgot myself to stone, a pavement letting landscape images from postcards appear from underneath the bricks. In echo with these and set on the ground, is Strangle and Struggle, another poetically charged urban assemblage that is composed of two paving stones held together by rubber bands. These works, similarly to the first ones, refer to Antoine de Saint-Exupéry’s saying (in Pilote de Guerre, 1942): “A rock pile ceases to be a rock pile the moment a single man contemplates it, bearing within him the image of a cathedral”. Between construction, assemblage and collage, Bastos created these works under the concept of ‘Cathedral Thinking’. In medieval times, architects, stonemasons and craftsmen who worked on projects of such magnitude, undertook these constructions with a common commitment to a project that exceeded their lifetimes. For Rui Calçada Bastos, this notion also applies to urban planning projects, spatial research, or long-term goals related to living beings and their environment, which require decades of anticipation and awareness that one is partaking in a project larger than oneself.

This project is supported by the Portuguese Embassy in Belgium and Camões – Instituto da Cooperação e da Língua.