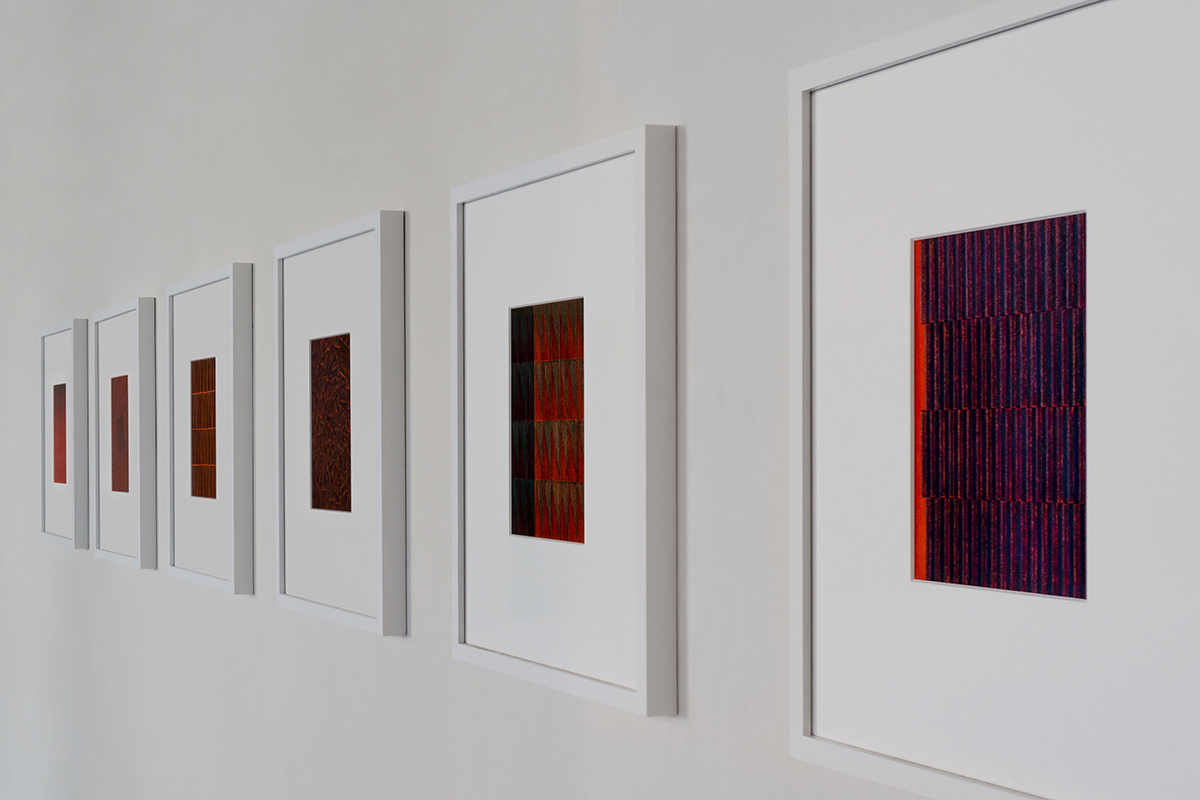 I told you when I came I was a stranger

Charles Laib Bitton, Exhibition view of " I Told You When I Came I Was A Stranger" Hors les murs of Irène Laub Gallery, Brussels (BE), 2017

Charles Laib Bitton’s mixed media artworks are of variable paper or wood formats  involving oils, coloured crayons, collage, charcoals, pastels and acrylics. These artworks, were for the most part produced in 2016 and reflect the research work undertaken in Vienna in 2015. They are the commencement of the artist’s initiatory process. They carry the marks of a transformation, of a cut-off or divergence in favour of a new technique, a new  language containing a deeper, richer chromatic range magnified by oils that merge perfectly on wood. For some artworks, this pictorial approach with coloured crayons and charcoals on wood or paper, is reminiscent of Munch or Spilliaert. Others, of an abstract, grainy  nature, favour more rounded curves that gradually point to a split from the perfectly constructed, rectilineal or well defined form.

The artist pursues his three dimensional work, decomposing, recomposing, adding and subtracting matter. He finds his inspiration from the work of German expressionists, such as the Die Brücke artists who instill a new purpose to earlier gravure art on wood, and to primitivism. In Charles Laib Bitton’s work, the groove engraved in wood suggests 3D while in reality, this has more to do with relief painting. Here, oils merge with the coloured crayons to flow into the wood slits, enhancing or dulling the tones.
Sets of lines, of extended tribal forms, of primitive vegetable patterns as seen on textiles and endlessly replicated ; here are there, arrow-like or scented undergrowth leaf patterns, may also evoke a minimalist human figure cut out in the depths of the wood. Marks aligned very closely to one another look united in their apparent similarities. While very different, taken together, they nevertheless form a part of the same whole.

A sort of musicality is perceivable from these falsely recurrent patterns of random intuitive shapes that dig up the secret chants from the depths of the soul, like furrows and scratches engraved in one’s memory. Everything is rhythm, measure, matter and division, similar to the shimmering notes of a dense and mysterious personal hymn. More brightly coloured intertwining lines, similar to basement floor markings, suggest root-reaching slits conducive to reinvention and a rebirth.
Behind these random-like abstractions, there is an urge to revert to nature, to become part and parcel of matter and to salute mankind. The artist slowly relinquishes straight lines and pure geometry, those he celebrated precisely for their restrained ardours in the « Romantic Imagism » exhibition. He chooses to break away from this, favouring the unpredictable and working beyond the frame. He does this ‘matter of fact’, humbly and discreetly, aiming to experiment with haphazard order and disorder.

Charles Laib Bitton’s current exhibition, while still dwelling on humility and geometric abstractions, parts from a certain formal stiffness and restriction to favour openness and the exploration of other pictorial avenues : instinct, intuition, gestual freedom and the return to origins, especially his gushing, organic African roots, bringing new life to his art, balancing the reds, earth-scorched browns, blue indigos, ocre yellows, and the less evident tones that, buried in matter, better release their power while containing their secrecy.
In collaboration with Irène Laub, the forty-odd artworks exhibited in a vast extra mural space, are of particular importance to this inward search, to the artist’s metaphysical and formal interrogation : A reflexion especially on a disenchanted, xenophobic world, prey to incessant cultural shocks to which the impenitent artist opposes his quest of identity and humanity. « Who am I, me the stranger, where do I leave my mark ? » refer to abruptions, obstructions, scars and other marks derived from the excavation of matter, from wood and Mother Earth, the crucible of all rootings and the site of singular or universal chronicles nourished by ancestral memories. Memories of Africa and his Morrocan-born father or of a maternal disorientated Europe, whose history continues to hiccup, finding it hard to rid itself of its demons. Testament to this, a more sombre pictorial expression illustrated by thousands of layers of colder tones : green kakis covered in different blacks, deep blues with flaky purples, or muted tones struck by bursts of light suggesting a ray of hope.
The cracks and streaks, sometimes discreet and almost inexistent, reveal an intense, almost monochromial sobriety to describe the essence of a coded language. One speaks of a contained exuberance, of controlled passion, of subdued revolt. To grasp the quintessence and richness of this work, one must pause over it and be rocked by the persistent musicality of the chromatic tones and stray between the gaps.

Charles Laib Bitton’s work requires one to read between the lines to track down the emotion deep within the layers of paint, and to grasp the concrete sense or the metaphor : the relationship with each other, with the stranger, like a mirror effect and a sham, as illustrated by the words sung by Leonard Cohen in « The Stranger Song »  out of which the painter chose to express his state of mind :