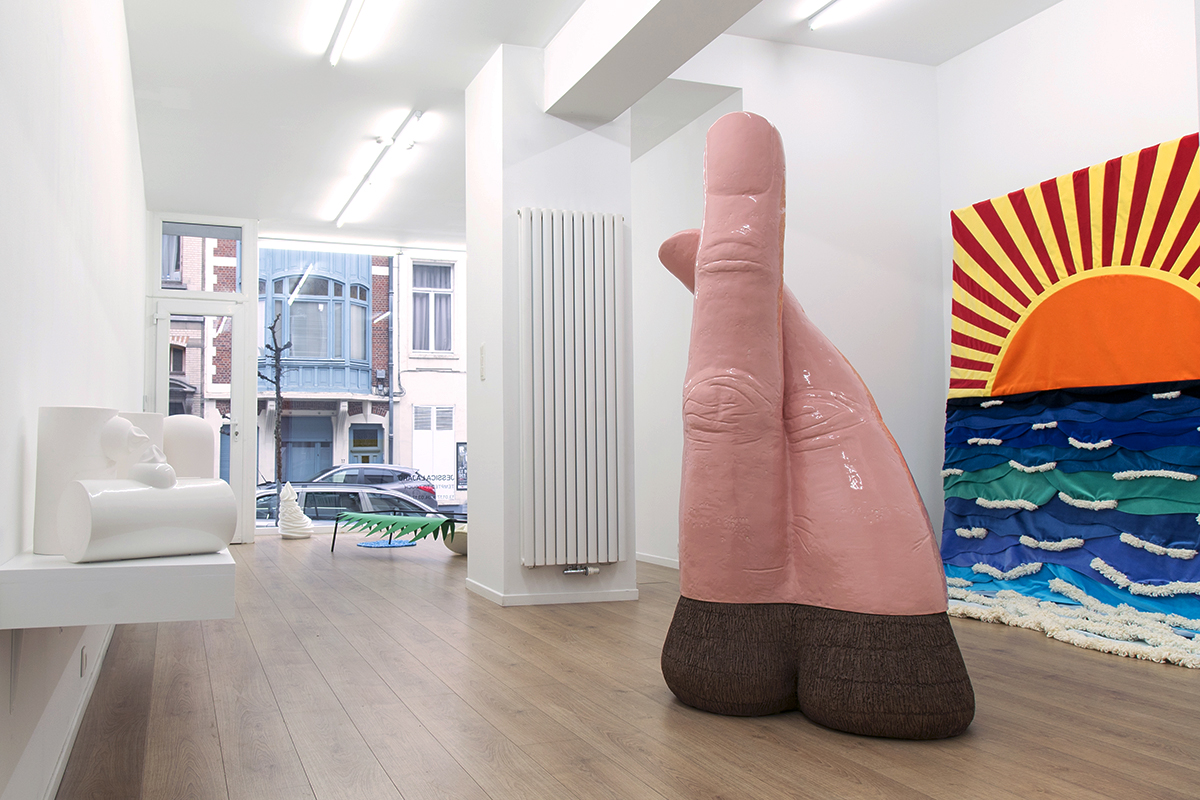 The works of Jessica Lajard engage with the moment, with the immediacy of perception.
Hers are images that strike the retina and seize the distracted eye; they seduce, and then retain.

What first draws the attention in the ceramics and mixed installations of Jessica Lajard, is the taste for materials and colors. A manifest pleasure of working the material and playing with textures is evident in her work. The reading is further completed with references to the domestic world or anecdotes from her own daily life. She subverts them with a destabilizing, sometimes biting, sense of humor. These hybrid images evoke the pop creations of Tom Wesselmann, such as for instance The Seven Smokers, a set of porcelain vases from Jingdezhen, topped by mouths holding burning cigarettes, whose motifs combine Chinese tradition and tobacco swirls. Her practice functions like a rebus in the sense that the understanding of the whole is based on each separate element and each separate element can alter the reading of the whole.

« Sex and humor have long canoodled in the foreground of Jessica Lajard’s art. This intimate coupling services a whimsical surrealism that flushes all aspects of the self-pleasuring universes implied by her sculptures. She collapses sensually alert organs of the human body onto a judicious selection of the forms of the world—organic and inorganic; animal, vegetable, and mineral; real and archetypal—so plausibly that the dreamlike realms she conjures assume an air of inevitability and come to tint our waking vision as well. Much as Georgia O’Keeffe did for flowers and desert bluffs, Lajard ensures that we can never again look at many things without the frisson induced by the erotic charge of her works. How will we encounter, say, a starfish and not think of the tongues into which she transformed the creature’s arms in works such as Lingus (2016)? The starfish in Lingus carries on its back an upturned seashell—its tiny orifice framed by a scalloped frill, its presence, we somehow infer, sensed by the wriggling tongues—suggesting, like many of the artist’s works, an entire comic and psychedelic narrative. Teasing incongruous elements into satisfying credibility, Lingus arouses a static object with the appearance of motion and seduces innocent denizens of the sea into an everlasting rehearsal of libidinous desire. That Lajard consummated this act in the unlikely medium of ceramic attests both to her formidable artistry and to the eventual yielding of recalcitrant earth to the ecstatic convulsions of polymorphous perversity.

The ambivalence of senses, through a clever distortion of materials and textures, and the ambivalence of meaning, evident in both the personal and collective report, partake in the creation of a confusing but familiar universe.

As points out Jean de Loisy*, Jessica Lajard «always cleverly organizes the discomfort of our perceptions by using a language that seems so everyday that we cannot immediately grasp that it is a protest against the whole idea of aesthetics.»

Lajard’s multipart installations cavort no less with such semantic comminglings. In Love Birds (2014), two monstrously enormous fingers cross in a gesture meant to attract good luck or to negate the offense of lying. At human scale, their gentle caress also recalls the familiar stance of lovers leaning against one another, as well as the slender swaying trunks of tropical palms. In fact, the artist fashioned the base of the fingers as tree trunks, the glossy pink glaze of skin abruptly changing to the rough thatch of bark. Two glossy green coconuts lie on the floor nearby, dropped like testicles from unseen foliage above, slightly misshapen olives spilled from the paramours’ inhibition-loosening martinis. On the wall behind, an appliqued velvet tapestry pictures a schematic sunrise over crested waves, a postcard- perfect backdrop for a South Seas fantasy. Here, the barely repressed sexuality of Lajard’s digits-cum-landscape oozes out even to the setting and the overlapping breakers begin to remind one of panting tongues or hanging breasts. The white wool tufts of foamy surf become somehow pubic in a spurt of Pop-Surrealist euphoria.

To render sea creatures, a vacation scene, plant life, Ming vases, or even modular objects of abstract design—as Lajard’s fertile imaginings have done in other instances—at once grotesque, hallucinatory, and sexy by endowing them with human moves and appendages, seems remarkable enough. To also make them funny is practically a miracle.» Joseph R. Wolin

Joseph R. Wolin, senior curator and critic based in New York, has organized exhibitions at Rubicon Gallery and The LAB in Dublin, and his exhibition of the work of Tom Molloy (2010) was seen at The Aldrich Contemporary Art Museum (Connecticut, USA). He co-curated the exhibition The Royal Art Lodge: Ask the Dust, which traveled to six venues in four countries during 2003 – 2005. A frequent contributor to The New Yorker and Time Out New York, he teaches at Parsons School of Design.