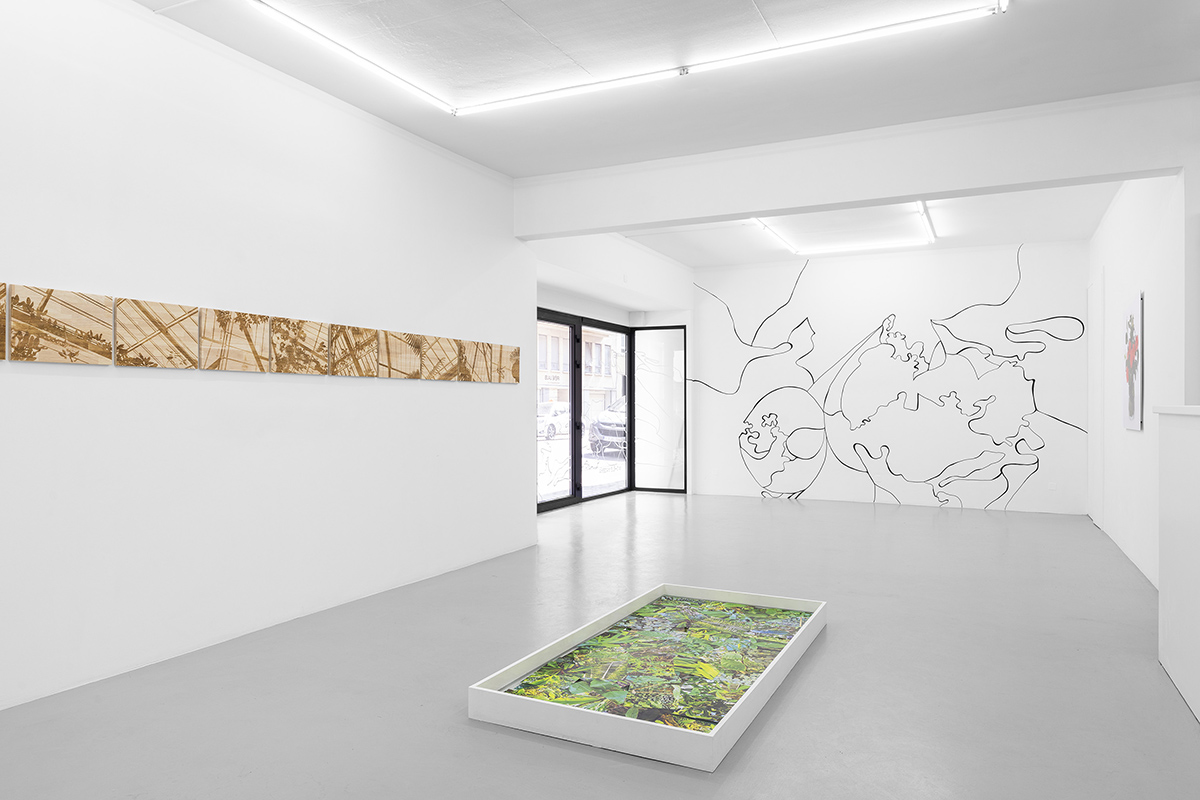 An exhibition curated by Julie Crenn.

The collective memory is considered here to be a vast garden in which some paths have already been laid out, while others have yet to be imagined. To do so, it will be necessary to clear the way, mark out and materialize these new trails. Il will also be possible – although not required – to give them a particular destination. Since the early 2000s, the work of Michèle Magema (born in 1977 in Kinshasa) consists in revisiting History by processing invisible materials, dialoguing with the unsaid and creating healing trajectories.

Considering herself to be a being of genealogy, the artist started immersing herself, from a young age, into her parents’ personal history. Born in the 1950s, they lived through the Colonization and Independence, and later, because they had to move to another country, had to go through the process of getting acclimatized to a new environment. Their history became a research platform upon which the artist lays her own body and her own history, as a link, as a boundary and as a pathway between generations. Using images, fragments of narratives and above all, silences, she gradually reconstructs a family history which connects two continents over the course of a long timeline. Her work contains a constant sense of motion, between the Democratic Republic of Congo and France, between Africa and Europe. Layer by layer, she probes a family history that inevitably extends to a collective one. Building on intimate and personal territory, she ends up connecting it to a far larger territory: a political, economic, social, cultural, agricultural, ecological and scientific one. In response to being made invisible and being silenced, Michèle Magema brings those who are not spoken of into the light, the smaller stories that make up History.

Belgium has an obvious role to play in this colonial, living and memorial geography. Michèle Magema explores the flow of living organisms between Belgian and Congolese colonial gardens. After researching maritime trade between Antwerp and Matadi, the artist is now interested in the Eala Garden (created in 1900) in Mbandaka (Democratic Republic of Congo), the Royal Greenhouses of Laeken (created in 1873) in Brussels and the Botanical Garden of Meise (created in 1797, current form in 1958). She carefully examines the gardens’ layout and architecture; the botanical choices and how certain plants are relocated from one continent to the other. Colonial gardens are multifaceted, as they have both scientific, agricultural and economic aspects. Through these, Garden Paths reveals a dialogue, a link (past and present) between the gardens, and by extension, speaks of what also connects the two countries.

The artist sows clues, tenuous elements of a common history that act as botanical cuttings, like the wall drawing – The Silence of Nsinga – which interweaves the maps of the three gardens. Drawings of vines, of cartographic and architectural lines become intertwined and form a territory with interconnected narratives. Dénètem Touam Bona writes: «The wisdom of lianas lies not only in the experience of these cosmopoetic links, but also in the possibility of turning them into the taut strings of a combat bow. This is why I see in lianas – as a figuration of allied plants and biomes – the auxiliary spirits of the pioneering struggles of the indigenous against the total commodification of living things and the standardization of ways of existence.» Further on, in the series Sambou Masodi – De l’autre côté du jardin, Michèle Magema engraves the architectural lines of Belgian greenhouses on the surface of rubber tree boards, which she combines with representations of indigenous Congolese plants. A drawing shows the artist’s parents – Les gardiens des Nti – in their garden in France. Images of plants from Central Kongo (her parents’ region of origin), made in situ in the greenhouses of Meise, appear in coloured waters. The photographic portrait of camelia flowers, Leopold II’s favourite, evokes the king’s involvement in the development of colonial gardens in Belgium (Les camélias de Léopold secundo – Rouge). Through mapping, revealing, engraving and crossing narratives, the artist establishes a physical relationship with unofficial and official documents and with geographical realities. With patience and determination, she studies the colonial orchestration of the gardens and its impact on human bodies. Underlying all this, the notion of acclimatization unfolds in space. The botanical and biogeographical vocabulary then determines what is endemic (indigenous) or exotic. The acclimatization, whether agreed upon or not, affects human or non-human elements.

By looking through the archives of specific places, Michèle Magema confronts, not without pain, colonial history – her own history. She chooses to extract a few clues from this resource of images, maps, voices and still bodies, to speak of the silence and invisibility that surrounds colonial history. The artist releases the ghosts of shared experiences. Like closely guarded secrets, the archives are kept under wraps. Aiming to heal and repair a narrative that urgently needs to be deepened, Michèle Magema untangles and merges the past with the present.

Julie Crenn is an art critic (AICA) and independent curator. Since 2018, she has been an associate curator for the programming of Transpalette – Centre d’art contemporain de Bourges. In 2005, she received a Master’s degree in art history and criticism from the University of Rennes 2, with a thesis on the art of Frida Kahlo. In the continuity of her research on feminist and decolonial practices, she received the title of Doctor of Arts (history and theory) at the University Michel de Montaigne, Bordeaux III. Her thesis is a reflection on contemporary textile practices (from 1970 to the present day). Since then, she has been conducting intersectional research based on bodies, memories and artistic activism. She regularly collaborates with magazines such as Artpress, Africultures, Laura, Branded, Ligeia, N. Paradoxa, Inter-Art-Actuel and L’art Même.