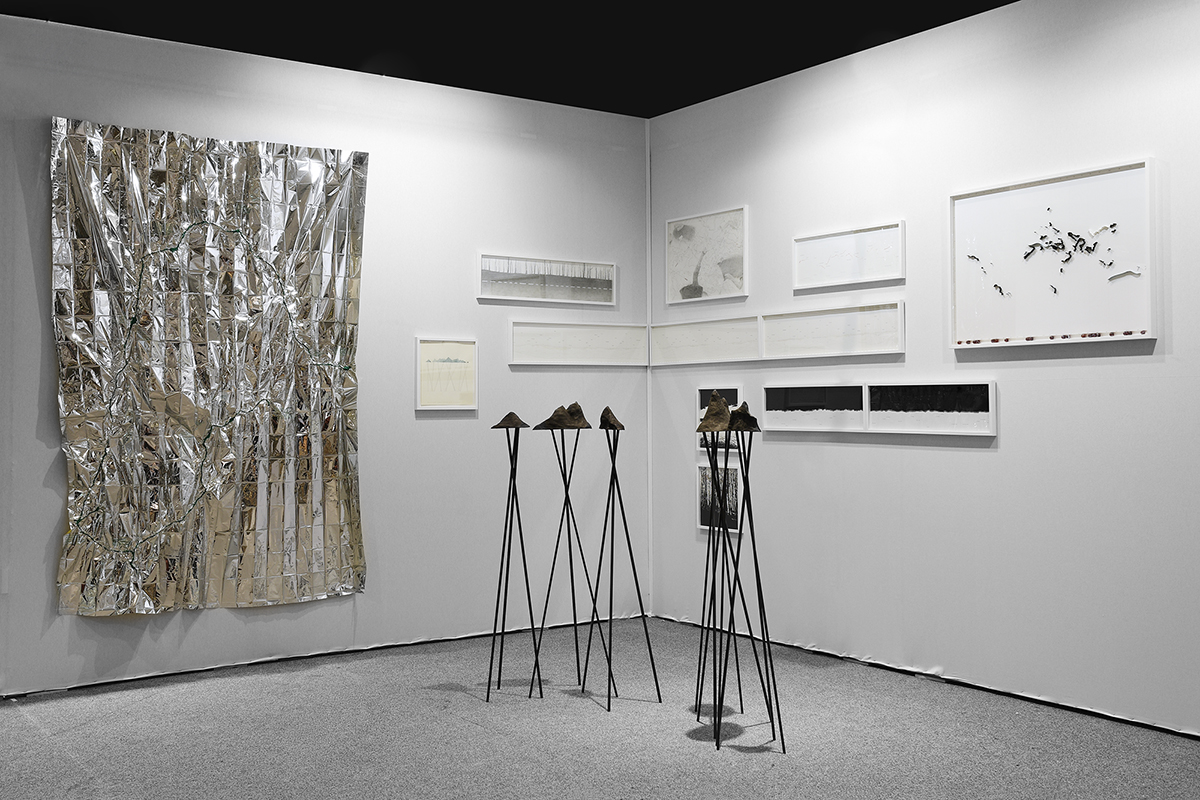 Eirene Efstathiou, How things are made 10, 2017, serigraph and paper matrix lithograph on paper mounted on aluminium, 35,5 x 55 cm (detail)

Eirene Efstathiou, How things are made 10, 2017, Serigraph and paper matrix lithograph on paper mounted on aluminium, 35,5 x 55 cm

Eirene Efstathiou and Lucile Bertrand both work from visual and textual paper archives. When manipulating those sources, the artists’ aim is not to misappropriate their meaning and content, but rather to bring forth past events that some would be only too willing to forget, revive them in a new context and question their hidden narratives. Eirene Efstathiou et Lucile Bertrand often use scientific methods: they trace, measure, compare, superimpose and juxtapose informations extracted from their base material, to create cartographic or stratigraphic landscapes.

Eirene Efstathiou’s process, in which documentary values intersect with their subjective interpretation, draws attention to the way historical events and data are manipulated and misrepresented by the media to serve a contemporary political narrative. By juxtaposing historical and media images, she reflects the echoes those politically charged events in the present and recent past. The result is a semantic blur caused by a loss of context that would allow an interpretation of facts.  These representations create a space on the margins of dominant discourse, which confronts erasures and structure violence of the past, but also people’s resilience in the face of ruin and loss.

Paper is Lucile Bertrand’s first medium of expression. She thinks and draws on various types of paper, from the cheapest to the most beautiful; she punches newspapers to explode their pictures, or transforms them into pulp to make sculptures. Her creations are characterized by pure lines and an economy of means that nonetheless hold considerable semantic depths, bringing forward a subtle and nuanced landscape of political and human crises. Be they everyday tragedies or large-scale disasters, Lucile Bertrand always manages to convey those events with powerful visual metaphors.

Despite their meticulous and highly referenced approach, they don’t expose their sources at first glance. Only a partial insight into these documents is offered, either through selected details and unexpected image associations, or through the insertion of short texts into the drawings. Therefore, the meaning has to be uncovered by the viewer, leaving some parts to be recomposed, researched, imagined… This process allows both artists to evoke heavy subjects through artworks that are at the same time evocative and incisive, poetical and political.