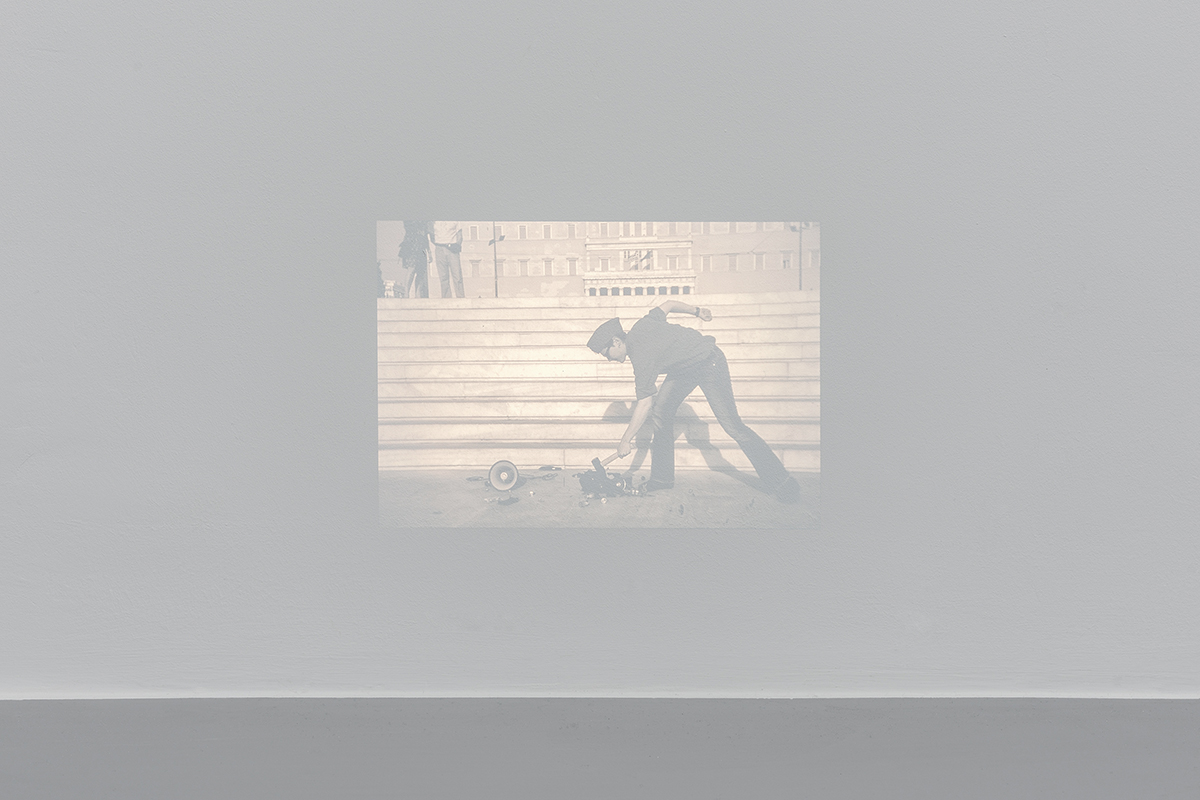 Eirene Efstathiou, When the revolution comes, 2014, Documentation of the performance, sound and diaporama, variable dimensions

Eight is a collective space activated in the centre of Athens that attempts to explore anew the possibilities of a critical intervention in an ever-changing precarious landscape. Bringing together forms of artistic, political and theoretical production, urban research and social action and building on radical experiments of recent years it seeks to investigate forms of continuity and instituting that challenge neoliberal demands of sustainability.

During the last couple of decades the city of Athens went through radical transformations that changed its social and cultural frameworks. Even prior to the economic crisis the cultural landscape was in a process of rapid transformation while the lack of sustainable cultural policies and infrastructures continuously produced a precarious, hyperactive, often self-instituted and vulnerable landscape. In the last decade we have witnessed radical paradigm shifts in social and political frameworks together with mobilisations, practices of social solidarity and commoning, new institutions, large-scale art events and local scale organising. Emergent practices ephemerally rehearsed new ways of inhabiting the city while its artistic scene experimented with forms and conditions of production in varied contexts. In the last couple of years and increasingly in the current moment, Athens seems to be in a yet new phase and undergo different forms of change in the way its urban, political and cultural landscapes operate.

This exhibition seeks to bring together artistic practices that appeared in different contexts in Athens and sought to relate with its social, political and urban conditions. Challenging the contemporary demand of artistic production – that constantly seek for the new and the innovative – City in Pieces explores past works that took place in diverse environments, conditions and moments. This return is not a call of nostalgia but rather an attempt to rethink artistic narratives and explore possible new relations, imaginaries and forms that can produce in the here and now.

Invisible Committee writes that ‘in reality what we need are not institutions but forms … Everything that lives is only forms and interactions of forms’ (2017: 70). City in Pieces seeks to explore and return to such forms in the transitional landscape of Athens re-examining models of situatedness in dialogue with social, urban and institutional realities. City Pieces are collected and re-composed inside the space EIGHT attempting to produce a temporary refuge, a living organism, a fugitive condition of symbiosis.