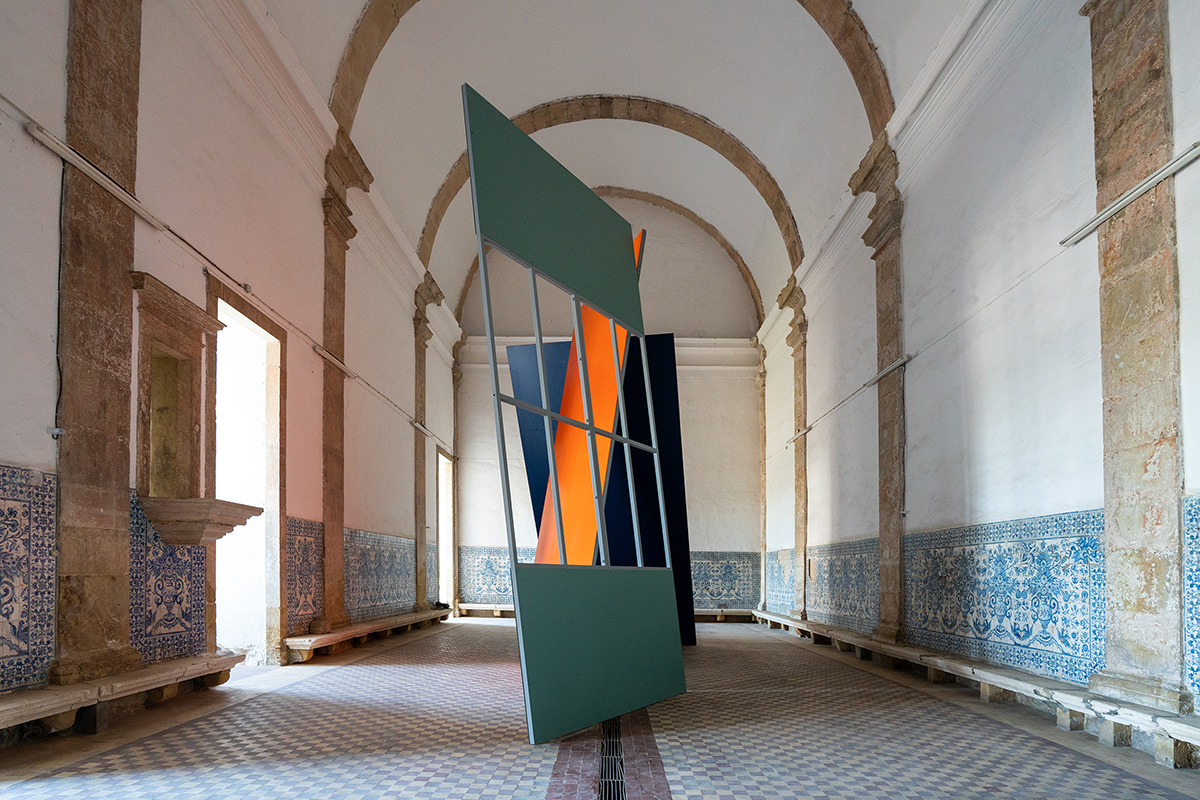 “The work of art is an object of passage and our life is also a passage. We can only shuffle the cards and change their order. What is needed is to reorder what is established and create another decomposed order. When we speak of sculpture in Europe, we speak of a monument, even when it is transportable. It is about working starting out from destruction, ruin, wear and tear … Death is really our future.”

José Pedro Croft, in a joint interview with Rui Sanches, by Teresa Blanch, 2001

In the presence of a work by José Pedro Croft, Leonardo da Vinci’s Vitruvian Man always returns to me, that man who discovers geometry through the choreographed movement of his body. It is the traces of this choreography of the body in motion that can be guessed at the base of his drawings or in the anticipated movement of bodies in transit that complement the spatial sense of the sculptures.

Each of José Pedro Croft’s sculptures has its own choreography implicitly inscribed. If the fruition of a work of art can be a privileged vehicle for an epiphany or transcendence, Croft’s construction process is diametrically opposed to any possibility of the sublime. It is a pragmatic process, carried out from sediments, with assembly, folding, cutting, unfolding and false symmetries, created to undo limits of perception, opening up to other possibilities. A perpetual elliptical movement, moving from one place to another, to return to the origin which is no longer the place from which we departed.

The error, the correction, the presence of the constructive elements – are never erased, and they are the testimony of the impossibility of building a world without blemish. Far from the sublime, his work transports geometry to the non-explicit present time. Geometry as a relation of forces.

From “Minimalism” he retained the economy of means. From “Arte Povera”, he rescued the possibility of the object. His work comes from an ancestral time in which each work of art aspires to be an imperfect machine, always unfinished, a trap, in the sense that Alfred Gell attributes to it, a leaked artifact of whose origin or destination we know nothing, but even so, it possesses an energy capable of seizing and transforming. This is, for Croft, the ultimate meaning of the work of art.

The finished form is no matter of interest to him, it is always a circumstantial answer to a problem, it is always a possibility in an infinite field of possibilities, it is always, and above all, the reification of a tension that materializes this way to weaken and be able to transform itself, in an endless process. This alone has allowed him to address the same formal matter over the past four decades without repeating himself.

If sculpture is, above all, a correlation of presences, and, by the same means, of energy fields associated with each and every one of those presences – the sculptor is responsible for orchestrating those energy fields, correcting their paths, making some explicit, annulling others, capturing movements of circular energies that do not meet.

In 2018, José Pedro Croft receives an invitation from Fundación Cerezales Antonino y Cinia (FCAYC) for an exhibition in Cerezales, León. He decides to propose the inclusion of the Circulo de Artes Plásticas de Coimbra and the Anozero – Bienal de Coimbra, with whom he was already developing a project, thus allowing the realization of a project that we had been hoping to accomplish for a few years, paving the way for the 1st international co-production of the Biennial.

In Cerezales, in the presence of a horizontal space whose tops are made up of integral planes of glass, establishing a continuity between the interior and the exterior, José Pedro Croft recognizes a strong unidirectional energy field, which should be short circuited, redirected, introducing a friction geometry, reordering what is established by placing the sculptural set consisting of four pairs of inclined planes, in shaky equilibrium that summon the viewer’s body to circulate through space, redefining the limits of this body/space. The colour, monochromatic in each plane, taken from the sculptures of the museums of Zaragoza and Machado de Castro in Coimbra, is used here underlining the artifice reinforcing the creation of rhythms and (false) symmetries.

Conceived as “sculptures to assemble”, in the presence of the Mannerism of the Refectory of the Convent of Santa Clara-a-Nova, in Coimbra, this sculptural set reconfigures itself and accompanies the verticality of the space, proposing a set of two monumental triptychs that verticalize and dematerialize, partially removing the coating elements – painted steel sheets, revealing the regular support structure of the sculptures, previously concealed by the coating. Materiality, colour, escape and tension spaces create improbable correlations, energy fields in transit that prevent the total and immediate perception of the refectory space, reconfigure it, creating a play of double effects.

Its presence in space activates correlations, where colour, shadow and light are materials to be taken into account.