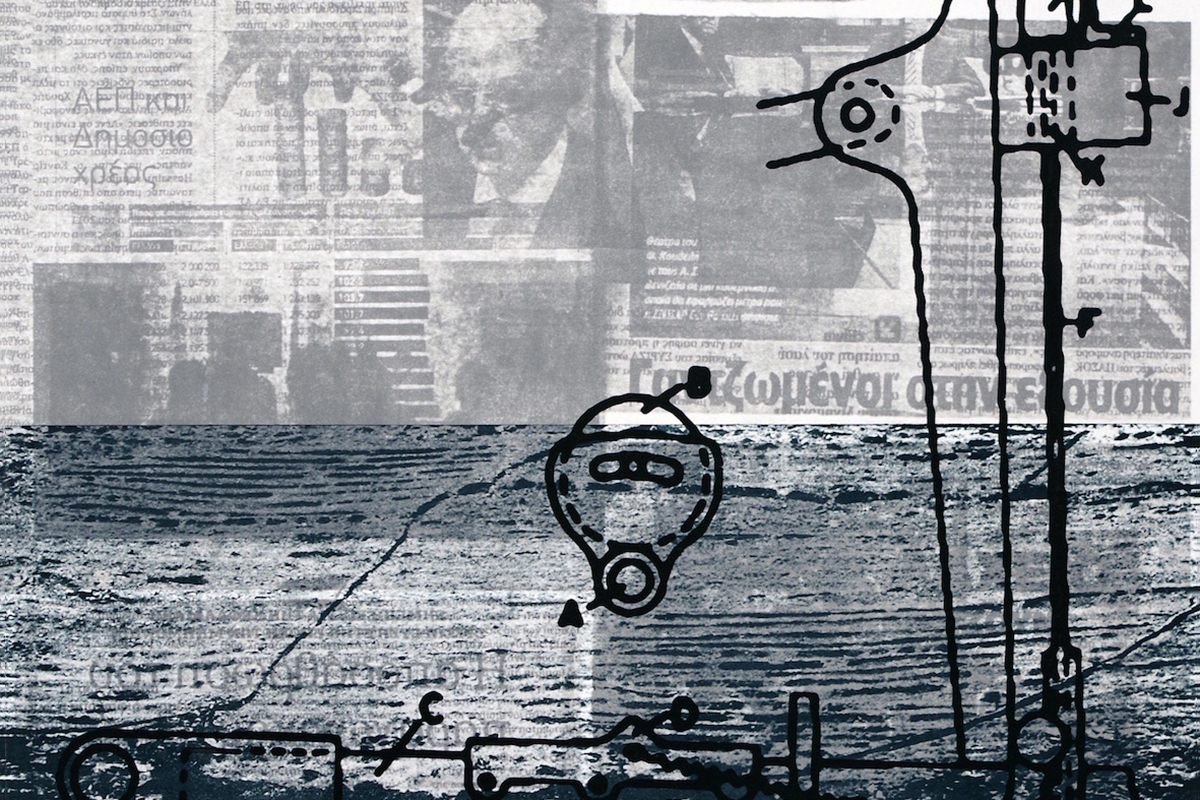 EIRENE EFSTATHIOU, How Things Are Made 4, 2017, Serigraph and paper matrix lithograph on paper mounted on aluminium, 35,5 x 55 cm

Organised by the Swarz Foundation, the exhibition probes the increasing and widespread loss of faith in politics and politicians today and examines how widespread disillusionment with our present political condition has created a sense of impasse and malaise that manifests itself in different ways in our everyday lives and in the public domain. The artists in it delve into the human experience of this phenomenon and reveal its complexities, as well as reactions to it, translating it into resonant images. They explore the current political discontent, particularly in Europe at this critical moment for the continent, highlighting its effects on the older and the younger generation; on the human psyche as well as the physical body. The exhibition comes at a timely moment: both in Greece, with elections coming up in the country October this year; but also in Europe, with the continuing Brexit impasse as well as European Parliamentary elections in May; the latter are expected to change the EU’s political dynamic.

As citizens, we are increasingly witnesses to the debasement of political language, the infantilisation and polarisation of political debate; the growth of a simplified discourse that panders to collective fears rather than addressing the real, pressing questions; the lack of accountability from politicians, and of course, “fake truth” and “alternative facts.” Clearly there is something profoundly wrong with contemporary politics: it is not only a case of the moral and intellectual inadequacy of politicians, but also the gaping chasm between the aims of politicians and the needs of citizens. The foundations of democracy itself are at risk, not only from the rise of demagogic populism in Europe, but also from the grip of financial institutions, mega-corporations, and special interest groups which have the power to influence the political agenda.

Greece, of course, best exemplifies the loss of sovereignty due to debt, where ordinary citizens have been forced to bail out a country driven to financial collapse by government mismanagement. The longstanding economic and political crisis in the country has led to disillusionment, mistrust of institutions, a sense of collective powerlessness, and a post-ideological phase characterised by apathy, individualism, and resignation. And of course, political melancholy (in Greece as in other European countries) is fundamentally tied to financial melancholy and austerity politics.

At a time when ideologies tend to divide people instead of uniting them; that condemn instead of bringing about understanding and respect, the exhibition attempts to map the pathology of politics today and asks us to reflect anew on our individual responsibilities as citizens. It aspires to encourage us to refrain from political apathy and instead reconsider and harness the power of both our individual as well as collective agency. Anatomy of Political Melancholy thus attempts the difficult task of both capturing the complexity of the moment and asks us to imagine a better future.